As you can see from my attached photographs, I am an orange domestic shorthair cat.  (While I understand that it may not count on any EEOC reporting forms, I may have an ethnic background, as two of my siblings were Siamese–meaning breed, not conjoined.  I trust the fact that my mother had a single litter with more than one father will not interfere with my admission prospects).  I split my time between Manhattan’s Upper East Side and Callicoon Center in Upstate New York.  While the city presents a wonderful opportunity for culture, I do enjoy weekend birdwatching and am a good traveler.  I am the son of two men (had I been a girl, I would, no doubt, have been named Lily), both Jewish lawyers who appreciate the feline seder post. My birthdate is April 13, 2011. 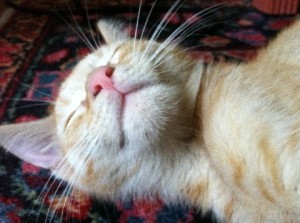 As an only child who has thus far been home-schooled, I feel I would benefit greatly from the social experience of Fluffs.  With respect to academics, I was an early litter box user and my achievements thus far include responding to my name, diligent use of my scratching post and the ability to play hide-and-seek and a feline version of Marco Polo, which does not require the use of a swimming pool.  I do have some mathematical apptitude, based on my refusal to be satisfied after less than three treats, but feel I would prefer a liberal arts education based on my aforementioned love of travel, sunlight in different locations and my appreciation for the arts.  I might like to major in art history as I am particularly fond of rocking a portrait of my great uncle, and would be happy to submit a short video of same in support of my application. 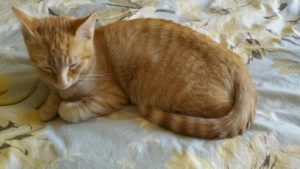 I plan to spend at least eight of my nine lives sleeping in warm places.

Thank you for your consideration.